A. Definition and Scope of Problem

Domestic violence can be physical, sexual, emotional, economic, or psychological actions or threats of actions that influence another person. This includes any behaviors that intimidate, manipulate, humiliate, isolate, frighten, terrorize, coerce, threaten, blame, hurt, injure, or wound someone.

Domestic Violence consists of “Intimate Partner Violence,” which includes current and former spouses, current and former dating couples with or without a child in common and dating couples. This type of violence can occur among heterosexual or same-sex couples and does not require sexual intimacy. IPV can vary in frequency and severity. It occurs on a continuum, ranging from one hit that may or may not impact the victim to chronic, severe battering.

Domestic Violence also includes “Non-Intimate Partner Violence,” which is violence between individuals who are not intimate partners, but have a familial relationship, such as, mother/adult son, or brother/sister.

Domestic violence not only affects those who are abused, but also has a substantial effect on family members, friends, co-workers, other witnesses, and the community at large. Children, who grow up witnessing domestic violence, are among those seriously affected by this crime. Frequent exposure to violence in the home not only predisposes children to numerous social and physical problems, but also teaches them that violence is a normal way of life – therefore, increasing their risk of becoming society’s next generation of victims and abusers.

Why does domestic violence occur?

Violent and abusive behavior in relationships results from a complex mix of learned behavior, cultural values and historical precedent

Characteristics of victims and perpetrators

Who Are the Victims?

Victims of domestic violence can belong to any socioeconomic, ethnic or racial group.

Who Are the Perpetrators?

Perpetrators also belong to any socioeconomic, ethnic or racial group.

B. Power and Control Techniques

Physical violence is the most typical form of abuse associated with domestic violence. However, victims suffer many types of abuse at the hands of their partners. Sexual coercion and assault are frequently part of the dynamics of a violent relationship. In addition, the power and control tactics described below reflect the common experiences of many victims of relationship violence. These tactics are used by perpetrators of domestic violence to maintain power and control over their partners.

This Power & Control Wheel (below) shows the kinds of behavior perpetrators use to gain and maintain control over their victim. Domestic violence abuse is never an accident. It is an intentional act used to gain control over the other person. Physical abuse is only one part of a whole series of behaviors an abuser uses against his/her victim. Violence is never an isolated behavior. There are other forms of abuse, which are shown in the Power and Control Wheel. 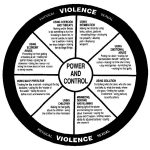 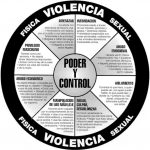 The majority of domestic violence victims experience some combination of the power and control tactics described below.

The perpetrator may threaten to harm the victim, victim’s children, other family members or family pet. They may also force the victim to engage in acts against her/his will or threaten to turn the victim into the Immigration and Naturalization Service, the Internal Revenue service or some other government agency. Threats of suicide by the perpetrator are also very common.

The perpetrator may use emotional abuse to convince the victim that they are crazy or irrational, thus causing them to doubt their own beliefs, experiences or feelings. This emotional abuse, in the form of name calling, constant criticism and insults, is much more serious than the occasional argument. To the contrary, the perpetrator often continually humiliates and degrades her/his partner, thus wearing away at the victim’s self-esteem.

The perpetrator often tries to isolate the victim from friends and family members. The victim may not be allowed to leave home without permission and may be forbidden from making telephone calls. Eventually, the victim can become completely cut off from anyone who might be able to help her/him escape from the abuse.

The perpetrator is likely to minimize or even deny their actions even in cases where injury occurs. If the police were called, but did not make an arrest, the perpetrator may rely on their inaction to deny wrongdoing. Also, the abusive partner will often blame the victim for their violent behavior and all too often, the victim will accept at least some responsibility for the abuse perpetrated upon them.

Perpetrators may treat the victim like a servant, making all the important decisions, acting like the “master of the castle”, being the one to define men’s and women’s roles.

The Cycle of Violence was first described by Lenore Walker in her 1979 work, The Battered Woman. This model can be useful when trying to understand the complex dynamics that occur in violent or abusive relationships. The Cycle of Violence has been described has having three stages: the tension building stage; the violent episode; and the honeymoon stage. Each stage is defined by certain characteristics. During the tension building phase, the relationship is typified by increasing hostility and stress that may be accompanied by frequent arguments and perhaps limited violence. This stage may eventually escalate to a more serious incident of violent and/or abusive behavior. It is during this second phase that injury is most likely to occur. It is also at this time that the victim in an abusive relationship may seek some type of intervention or assistance. The violent episode is frequently followed by a third phase, often referred to as the honeymoon phase. This phase is characterized by remorse on the part of the perpetrator and hope for change on the part of the victim.

Although not all abusive relationships follow this cyclical pattern, the cycle of violence can help to explain what both the victim and the abusive partner are experiencing in many instances. The victim of abuse may be more interested in stopping the violence than in ending the relationship, while the perpetrator may be afraid his/her partner will want to leave. The honeymoon phase represents their efforts to repair and normalize the relationship and may provide the victim with hope that the batterer’s behavior will change. In addition, the difficulties involved in ending a violent relationship may seem overwhelming for the victim of domestic violence. Unfortunately, in many abusive relationships the violence will continue and may escalate over time without intervention. 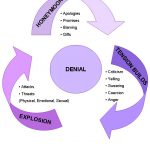 A frequently asked question regarding victims in abusive relationships is “why don’t they just leave?” While it seems a simple enough way to end the abuse, the reality is that leaving a violent/abusive relationship is anything but simple.

Leaving an abusive relationship does not guarantee an end to the abuse; rather, the abuse often escalates at the time of separation. The most dangerous time for a victim can be when he/she attempts to leave or end the abusive relationship. Many domestic violence murder-suicides occur when the victim tries to end the relationship. Increased threats to children and other family members. The fact that many victims do leave or seek help is truly remarkable in light of the many barriers they face.

Despite the many obstacles faced by victims, people continue to ask “why don’t they just leave?” It is time for us to change the dialogue. Instead of placing the burden on the victim to get out of the abusive relationship, it is time that we shift the focus to the person responsible – the abusive partner. Instead of asking why the victims will not leave, it is time that we ask instead, “why do people abuse and why is it allowed to continue?”

E. Impact of cultural issues on victims of domestic violence

Victims should be informed that reporting to the police or requesting a PFA from the courts will not subject him/her to deportation or removal proceedings.

Children of all ages can be deeply affected by domestic violence 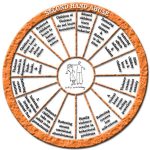 Infants – may not develop the appropriate attachments to their caretakers who are crucial to their development and may suffer “failure to thrive”.

School age Children – develop behavioral problems including: depression, anxiety, violence toward peers and difficulty with authority. In some cases the anxiety level can be so high children are afraid to attend school for fear of what will happen to the abused parent or younger siblings when they are not home.

Adolescents – have increased risk for repeating abusive behavior patterns in their dating relationships.

They are also at increased risk for alcohol and drug abuse, criminal behavior and eventual entry into the criminal justice system.

Adolescents are at risk of academic failure, school drop-out, delinquency, and substance abuse. Some investigators have suggested that a history of family violence or abuse is the most significant difference between delinquent and non delinquent youth.

Children who witness domestic violence may have the following symptoms

** Document courtesy of Ms. Kristina Korobov, Sr. Attorney for the National Center for the Prosecution of Violence Against Women.